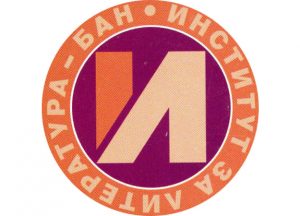 The main task of the Institute is to understand, preserve and promote the Bulgarian literary and cultural heritage in the context of the European humanitarian traditions. In a wide and multifaceted international collaboration, it takes the form of academic collective and monographic studies of literary history and theory, studies on the work of Bulgarian writers, compilation of encyclopaedic and reference books, creation of electronic databases and digital libraries, search, safeguarding and publication of archives and archival materials, preparation of multi-volume academic publications of Bulgarian writers.

The long-standing scientific research experience and the scientific potential of the Institute allow the realization of fundamental scientific projects that require teamwork of highly qualified specialists. Their scientific achievements are recognized in the national and international humanitarian community.

Literary-historical and comparative studies are conducted at the Institute for Literature and general theoretical works are developed aimed at studying the Bulgarian literary heritage which is representative of the contribution of Bulgarian culture to the world civilization. The scientific activity is carried out with modern scientific approaches and with the means of modern technologies. Their use makes it possible to combine academic precision and in-depth studies with the practical applicability of science, to prepare digital resources that respond to the contemporary demands of society. The wide availability and high quality of the scientific products created in the Institute help to form a new type of thinking and the building of ethical values ​​through the rationalization of the past and outlining prospects for the future.

Part of the research efforts of the Institute are aimed at exploring and investigating unknown or little-known literary-historical facts and their contemporary interpretation in order to outline the essence and the directions of the literary phenomena and to trace the interactions and polemics in the Bulgarian culture. In these studies, the documentary basis and the scientific approach are in an organic synthesis, and literary history is represented as a system of aesthetic and ethical values ​​which, in new exploratory contexts, create fruitful cultural dialogues. Thus, the field of the literary studies is expanding, and the Institute is becoming a center of comparative research. In its research activities, a considerable part has also been devoted to previously neglected areas such as emigration literature, minority literature in Bulgaria and abroad, anti-totalitarian literature, parallel aesthetic processes in the Bulgarian and other Balkan and European literatures. The realization of such projects, which are fundamental for the contemporary humanities, is realized through the creation of interdisciplinary consortia of which the Institute for Literature is a coordinator.

Archives and documents are searched for, preserved, studied and published. Unique encyclopaedic and reference books such as “Cyrillo-Methodian Encyclopaedia” (4 volumes), “Dictionary of Bulgarian Literature” (3 volumes), “Dictionary of New Bulgarian Literature”, “Periodicals and Literature (6 volumes), “Reception of the European Literatures translated in Bulgarian” (6 volumes), “Periodicals of Russian Emigration in Bulgaria”, the Encyclopaedia “Bulgarian Revival. Literature. Periodicals publishing. Literary life. Cultural centers” (in 3 volumes), Literary archive (9 volumes), “Critical Heritage of Bulgarian Modernism” (4 volumes). Thirty-nine interviews with prominent Bulgarian writers and critics have been published. The publishing house “Boyan Penev” has been established at the Institute which publishes scientific collections and monographs in the field of humanities.

The Institute for Literature preserves:

Scholars from the Institute for Literature were awarded: