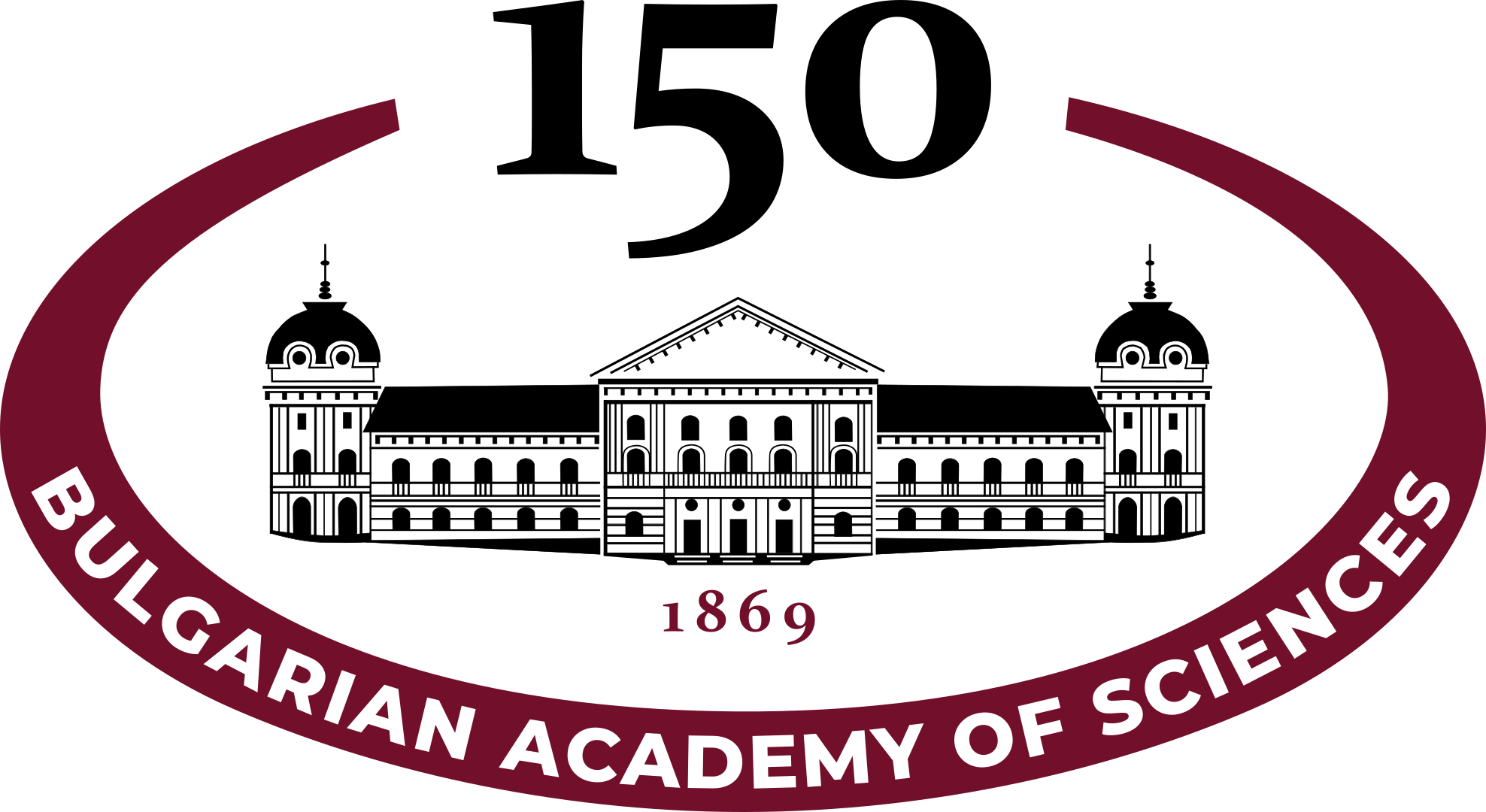 Established in 1869, the Bulgarian Academy of Sciences is the oldest institution in modern Bulgaria. It carries out scientific work in accordance with the universal values, national traditions and interests.

Address of the President of BAS 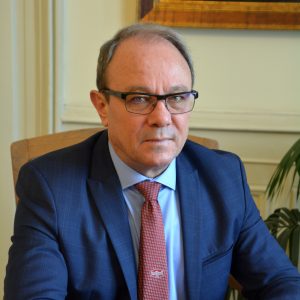 Among the founders of the Bulgarian Learned Society in 1869, in Braila, there were prominent figures of the Bulgarian Revival such as Marin Drinov (Professor at Kharkov University), Vasil Drumev (later Prime Minister of the Principality of Bulgaria and Metropolitan of Tarnovo), Gavril Krustevich (Governor of Eastern Rumelia). This historical act of Bulgaria was a deed of various strata of society: from established names in science to the Apostle of Freedom, Vasil Levski, who was also among its founders and first donors. The highly patriotic spirit of the Bulgarian people stood out particularly vivid in the strong public support that made the Society a unifying symbol of the nation. The founders showed great vision with regard to the administration and the legal framework of the institution by taking care to adopt a Statute and publish the official organ: the Periodical journal of BLS. At the same time, the collecting of a book and a documentary fund, preserved to this day at the Central Library and Archives of BAS, began.

The European prestige of the Society was also raised by European capacities such as Konstantin Jireček, Minister of National Enlightenment and Professor at the University of Vienna. The builders of modern Bulgaria did not forget to allocate funds for the moving of BLS from Braila to the newly liberated Principality. The rise of its scientific status, however, was mostly related to the name of the longest-running chairman, Ivan Evstratiev Geshov, prominent banker, politician and public figure and generous donor of the institution. Owing to his efforts and the attitudes of society, in 1911 the society grew into the Bulgarian Academy of Sciences.

Established only with three branches – Historical-Philological, Natural-Medical and State-Scientific, BAS played a role in establishing the young Bulgarian state in the Balkans and in Europe. During these years, its public mission was particularly strong with scientific developments in the area of ethnogenesis of the Bulgarian people, searching for its historical roots and forming a new value system.

After the Second World War, the Academy gradually grew, becoming a poly-structural research institution. Beyond the old focus on fundamental scientific research, the applied and exact sciences began to excel which in the previous decades had been developing mainly in university circles. Thus, its social commitment was meeting the needs of the new, planned economy and the increased economic opportunities of the country. During this period, a number of pioneering developments were carried out at the institutes of the Bulgarian Academy of Sciences in different areas which provided our country a significant place on the world technological map. It is enough to mention the birth, in the Academy, of such activities and fields as: the electronic industry of Bulgaria, nuclear energetics, robotics, space research, the development of nanomaterials and new technologies, biomedicine and a number of others. All this has helped to raise the fundamental and applied research of the scientists from the Bulgarian Academy of Sciences at the world level.

Nowadays, the Bulgarian Academy of Sciences is the largest scientific institution in Bulgaria with proven international authority. It embodies both the traditions of the past and the challenge of the country on the path of its European integration. Inseparably connected with the state, BAS is both a scientific and a public organization – an organic part of the spiritual development of the Bulgarian nation.

In this jubilee year, too, the Academy continues to work for its mission: “to conduct research in accordance with universal values, national traditions and interests, to participate in the development of world science, to study and to multiply the material and intangible cultural and historical heritage of the nation”. 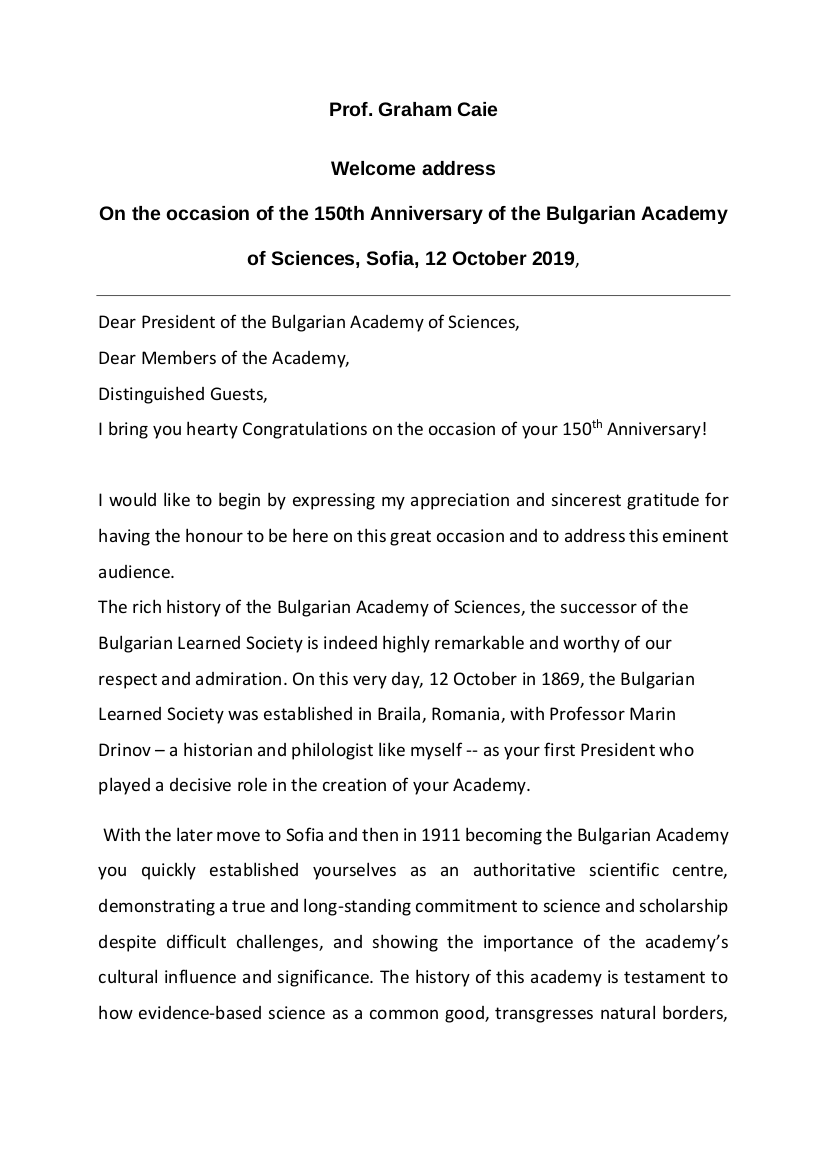 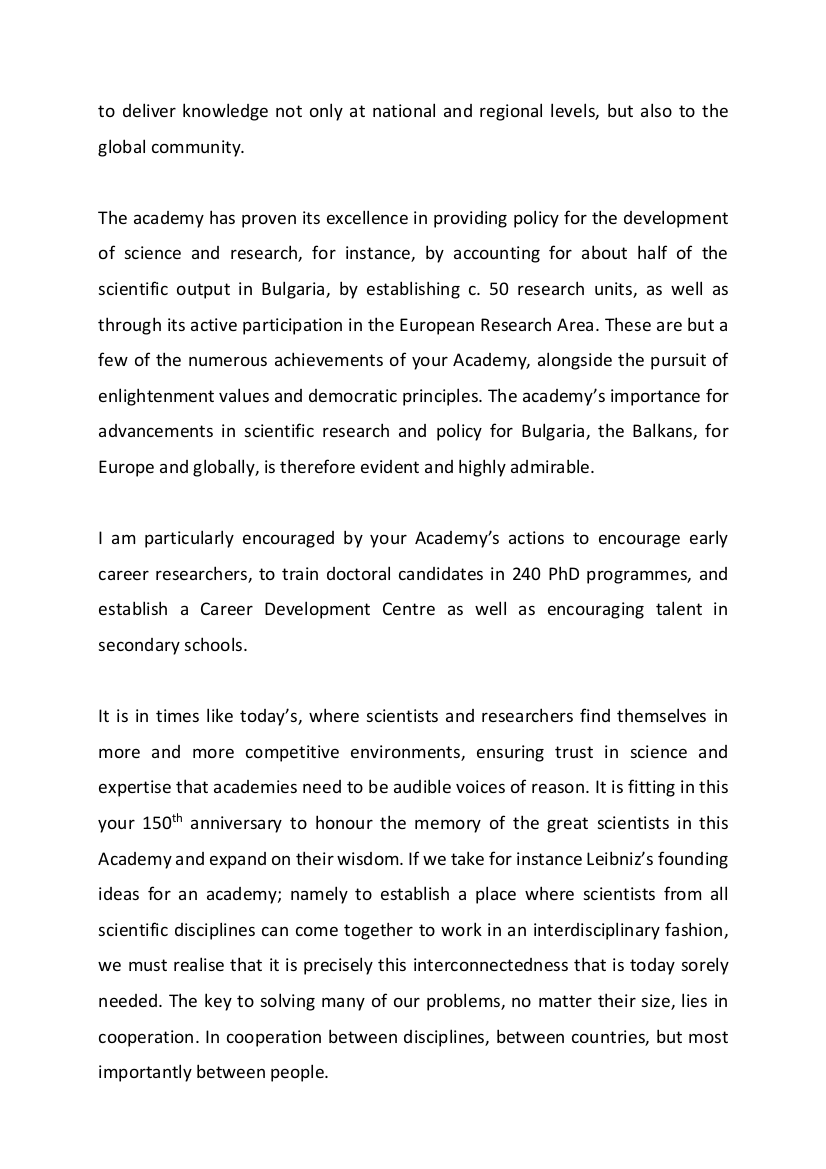 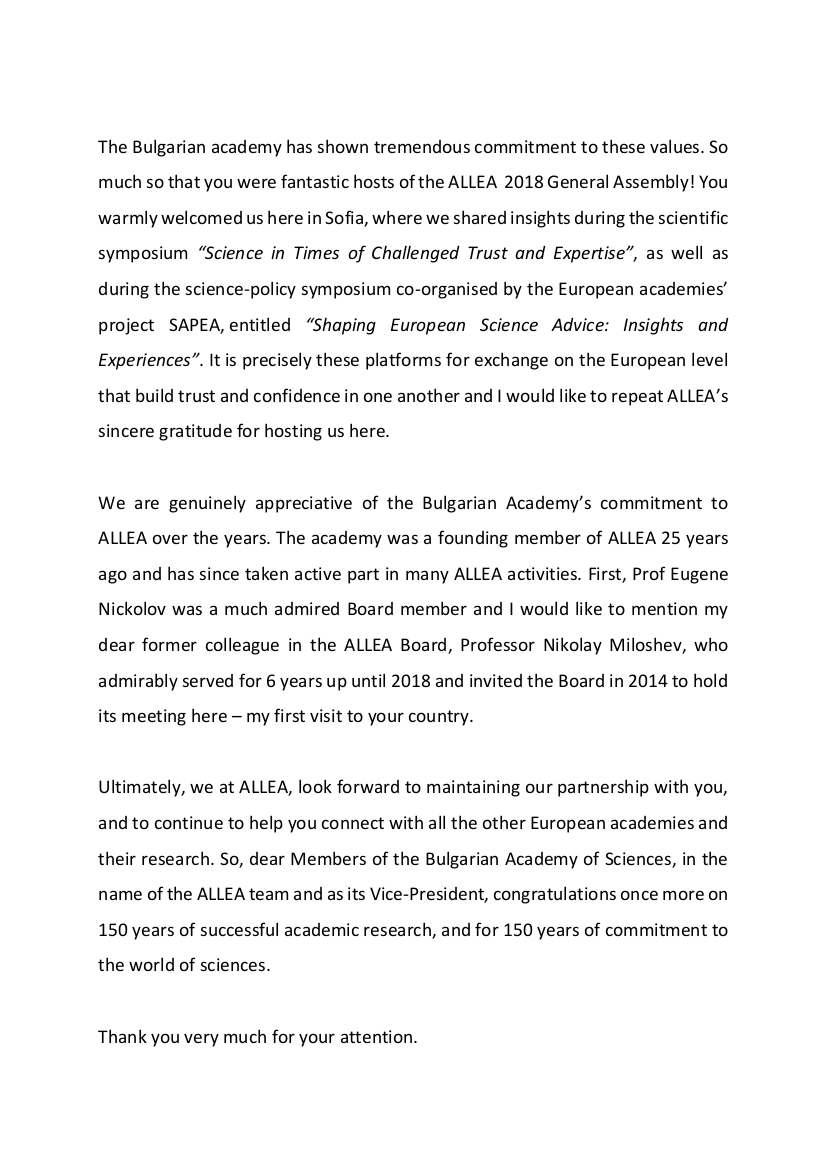 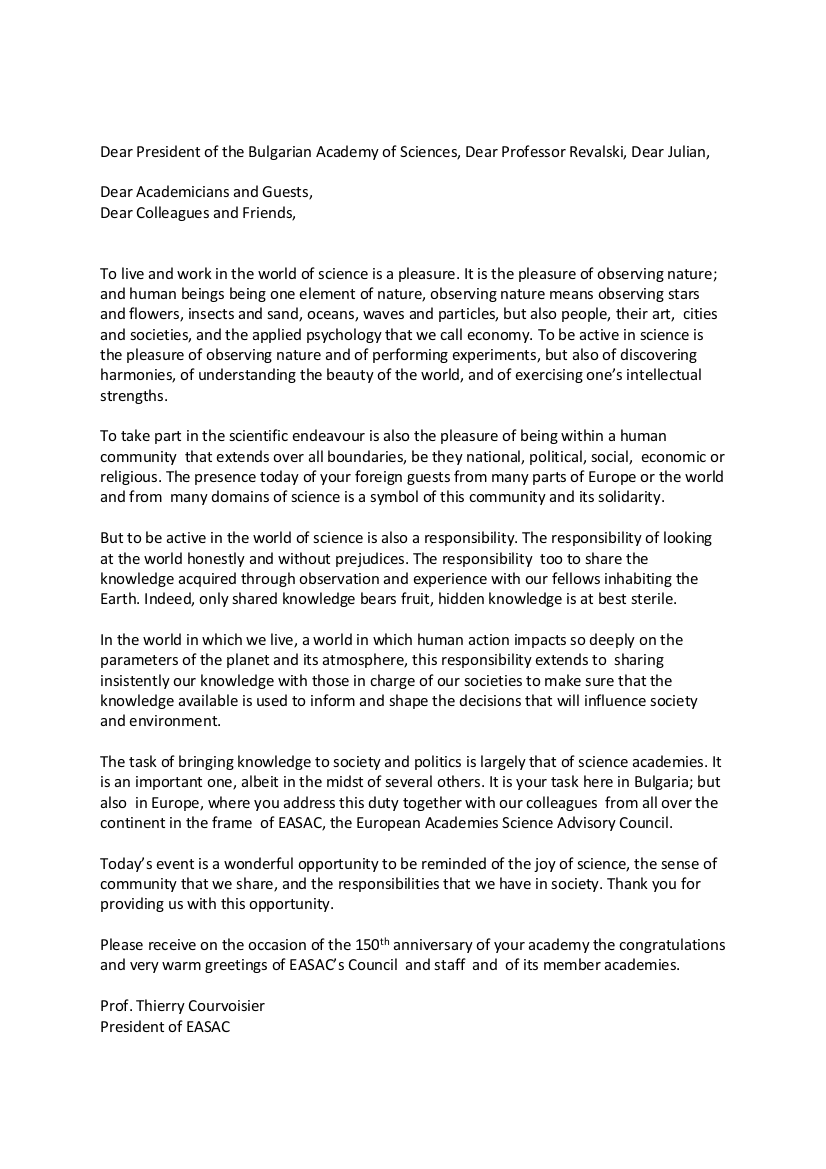 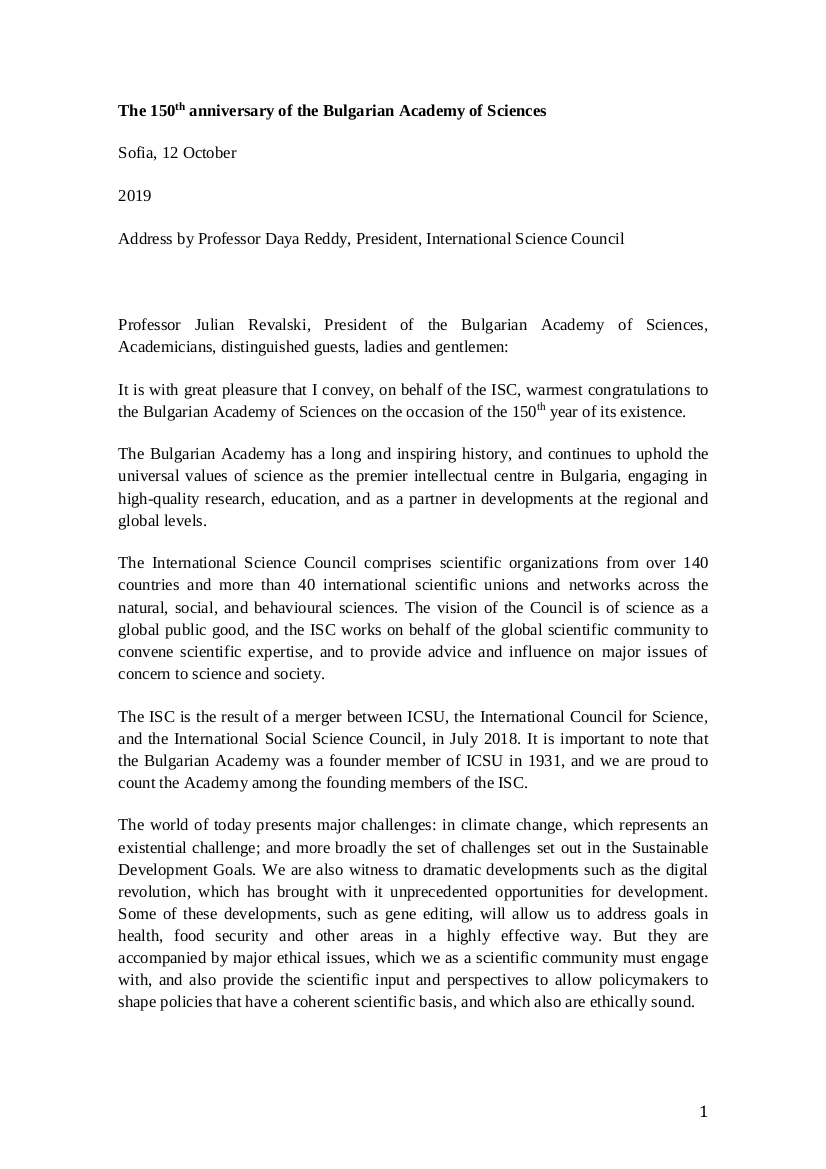 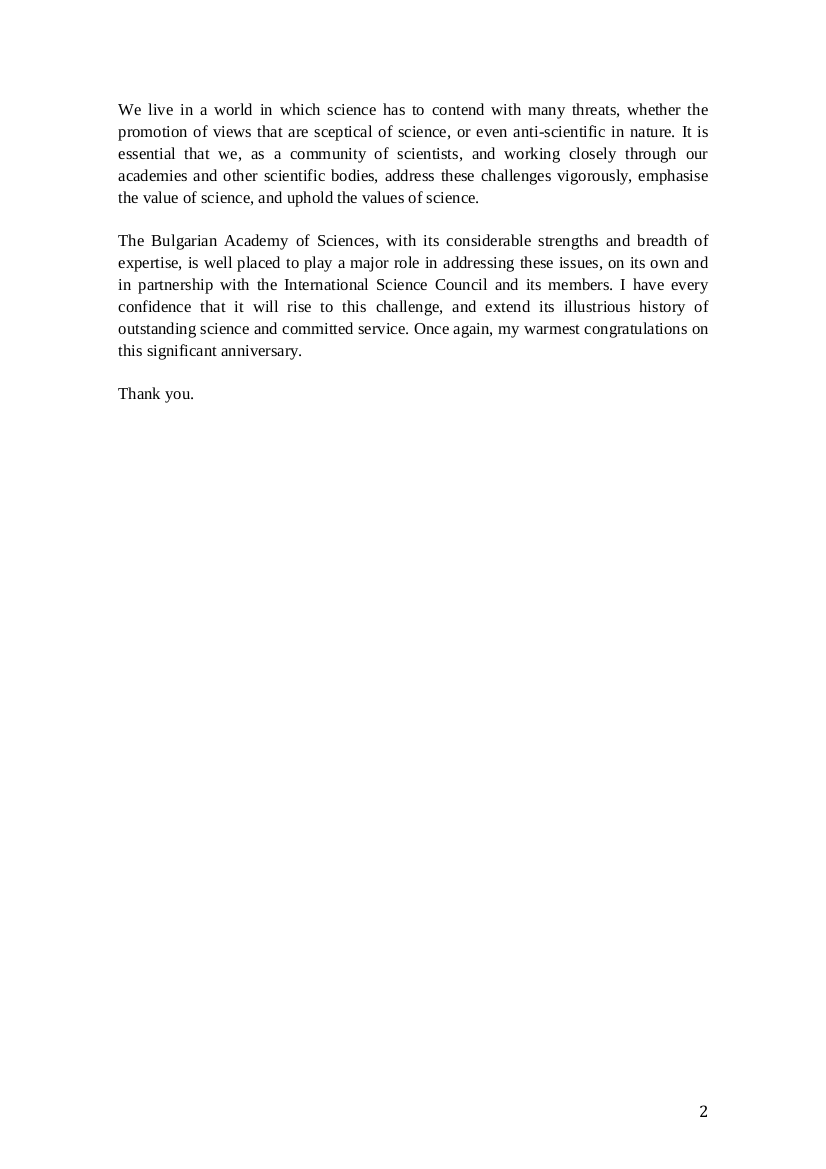 President and CEO of the CNRS (France)

President of the European Science Foundation

President of the International Science Council

Ministry of Science and Technology (Taiwan)

President of the Azerbaijan National Academy of Sciences

President of the Macedonian Academy of Sciences and Arts

President of the Romanian Academy

President of the Serbian Academy of Sciences and Arts

President of the Slovenian Academy of Sciences and Arts

President of the Estonian Academy of Sciences

President of the Czech Academy of Sciences 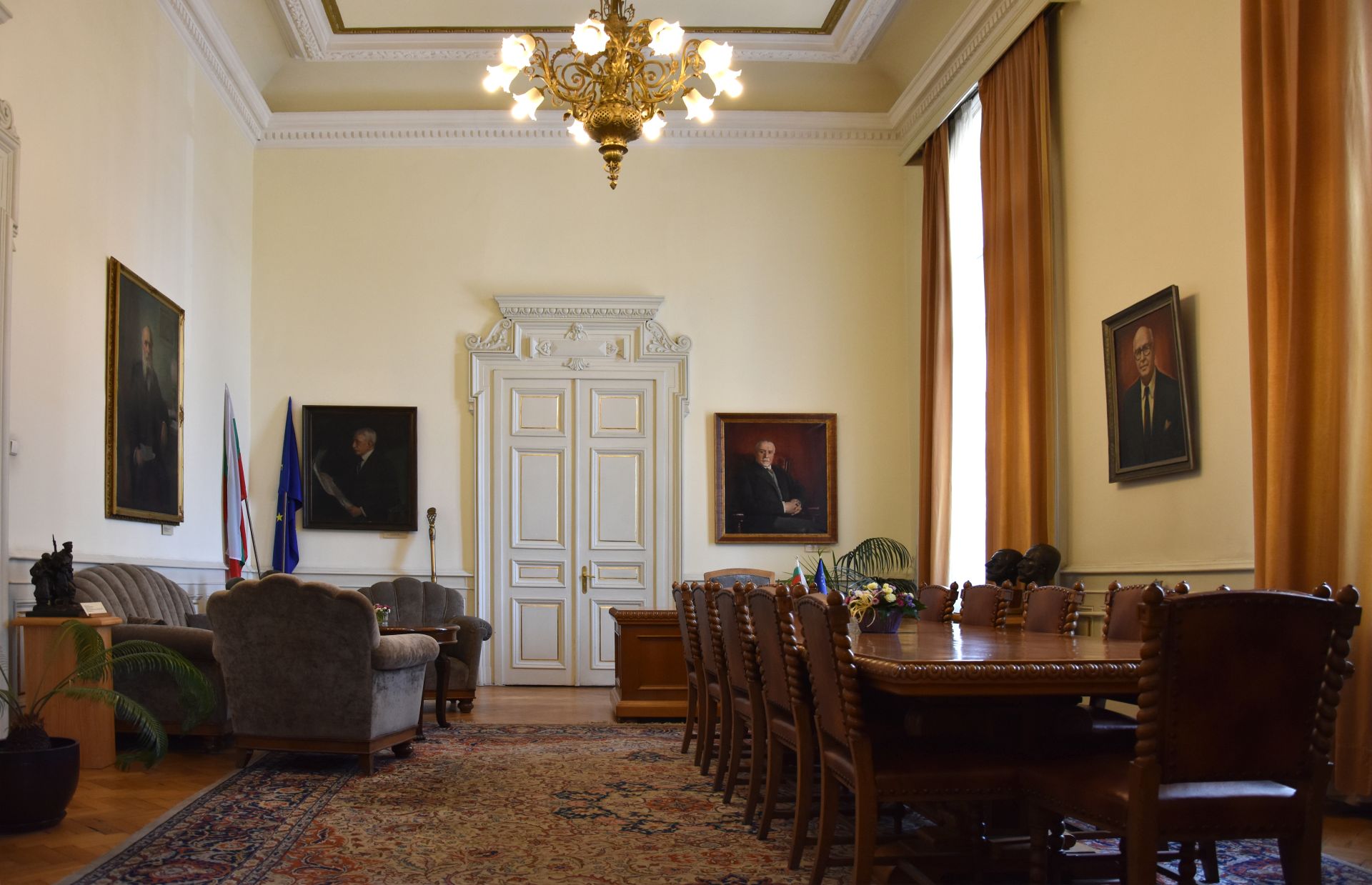 
The Bulgarian Academy of Sciences is the successor to the Bulgarian Learned Society, founded on 12 October 1869 in the Romanian town of Braila. Its purpose was to disseminate enlightenment among Bulgarians, to improve the Bulgarian language and study Bulgarian history and manners, to be a scientific center and to establish contacts with similar scientific centers abroad. The first President of the Society was the university scientist and historian Marin Drinov, and one of its founders, Vasil D. Stoyanov, was the secretary. After the Liberation of Bulgaria, BLS transferred its activities to Sofia and established itself as an authoritative scientific center with a rich social, cultural and political activity. In 1911, it was renamed Bulgarian Academy of Sciences, and the first law on it was adopted. 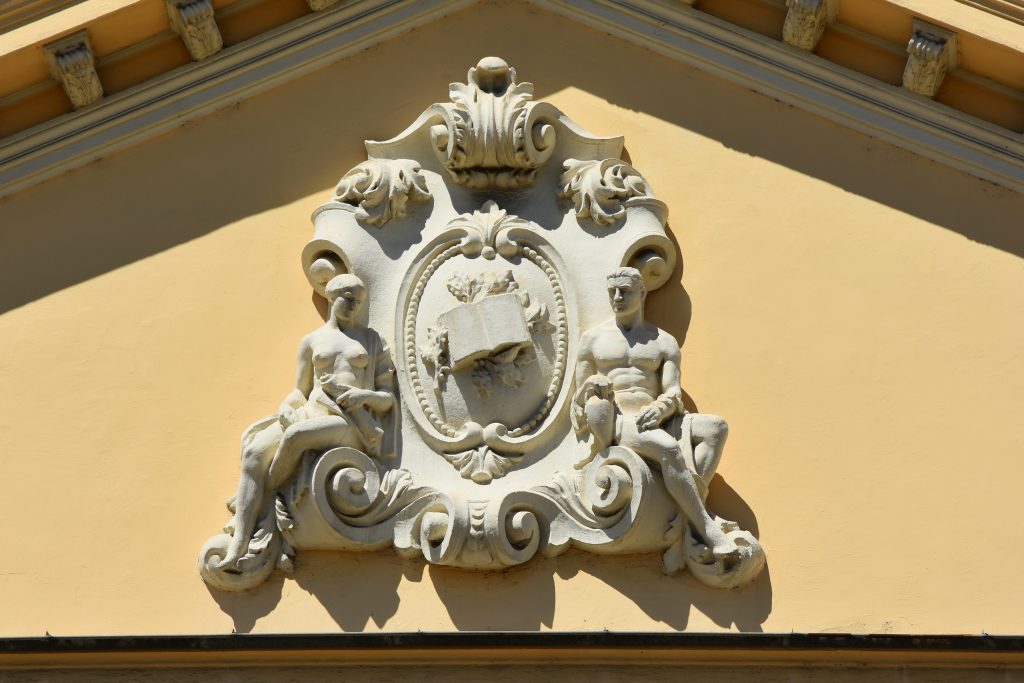 We are discovering new horizons! 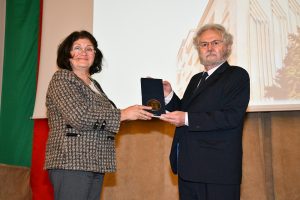 The Honorary sign “St. St. Cyril and Methodius” of the President of the Republic of Bulgaria and honorary plaque “Marin Drinov” of the Bulgarian Academy of Sciences received the Economic Research Institute (ERI-BAS) for its 70th anniversary. They were presented to Prof. Alexander Tasev – Director of the Institute, for the overall contribution of the institute to the development of economic science in Bulgaria and its tireless activity in the field of economy, education and business. END_OF_DOCUMENT_TOKEN_TO_BE_REPLACED 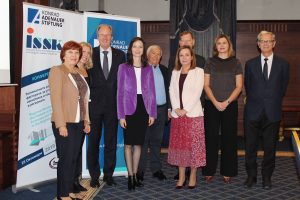 Regional Development and Success Factors: Education, Economy and Social Policy in the Regions is the topic of the conference held today at Grand Hotel Sofia. The Institute for the Study of Societies and Knowledge (ISSK) of BAS in cooperation with the “Konrad Adenauer” Foundation Office in Sofia is organizing for the seventh consecutive year the scientific event which this year is dedicated to the 150th anniversary of BAS. END_OF_DOCUMENT_TOKEN_TO_BE_REPLACED 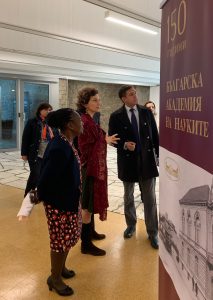 UNESCO Director-General Audrey Azoulay visited, on 21 October, the photo exhibition of the Bulgarian Academy of Sciences which is arranged in the UNESCO premises in Paris and presents the activities of the Academy to the international community. Ms. Azoulay was impressed by the wide network of BAS institutes developing many-year active work in various fields of human life as well as by the achievements of the Academy and its contribution to the international exchange of scientific and technical experience. END_OF_DOCUMENT_TOKEN_TO_BE_REPLACED 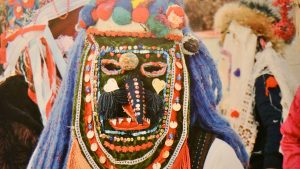 Bulgaria is one of the first countries in the world to fulfill the condition of the 2003 UNESCO Convention on the establishment of a National Register of Intangible Cultural Heritage. That was highlighted as a major contribution of the Academy’s scientists by corr.-mem. Mila Santova at the international scientific conference “Current Issues in the Study of the Intangible Cultural Heritage and the Implementation of the 2003 Convention. The Contribution of the Scientists of BAS”. The two-day conference has begun on 17 October at the Bulgarian Academy of Sciences and is dedicated to the 150th anniversary of the Academy. It is organized by the Institute of Ethnology and Folklore Studies with Ethnographic Museum, in collaboration with the Regional Center for the Safeguarding of Intangible Cultural Heritage of South-Eastern Europe under the auspices of UNESCO. END_OF_DOCUMENT_TOKEN_TO_BE_REPLACED 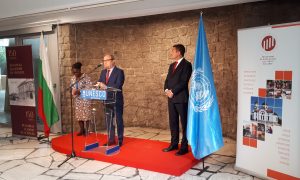 The opening of the exhibition took place on 16 October in the presence of ambassadors, Bulgarians living and working in France and representatives of the scientific community. The event was hosted by the Ambassador of Bulgaria to France and Permanent Representative of Bulgaria to UNESCO, H.E. Anguel Tcholakov, and the President of BAS, Prof. Julian Revalski, DSc. END_OF_DOCUMENT_TOKEN_TO_BE_REPLACED

Sponsors of the celebrations 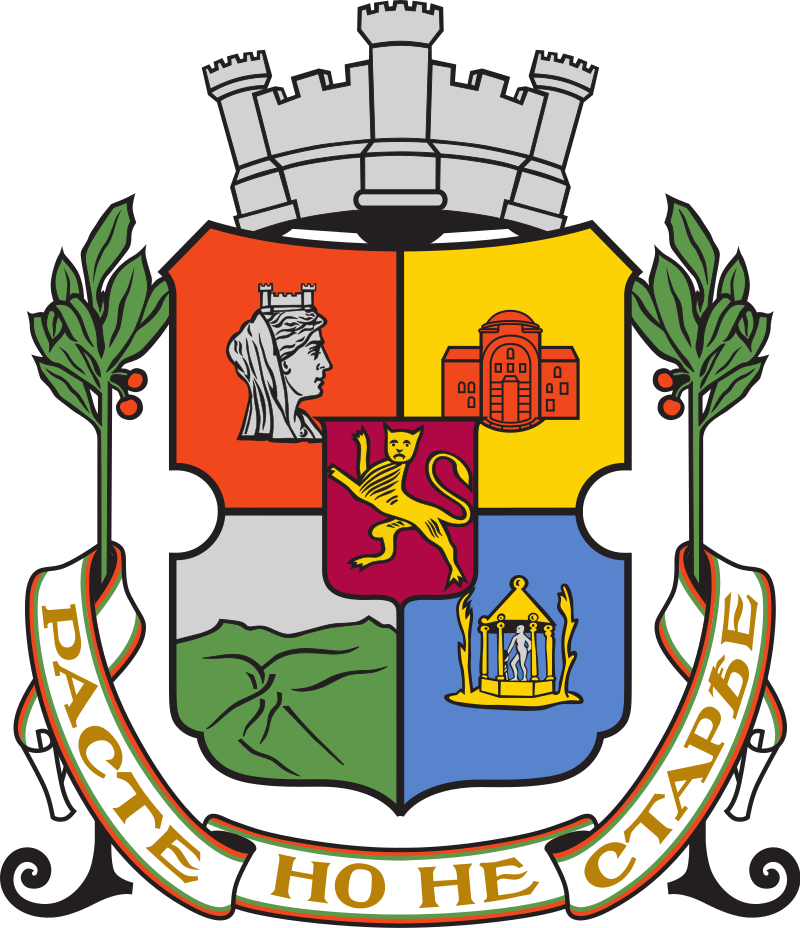 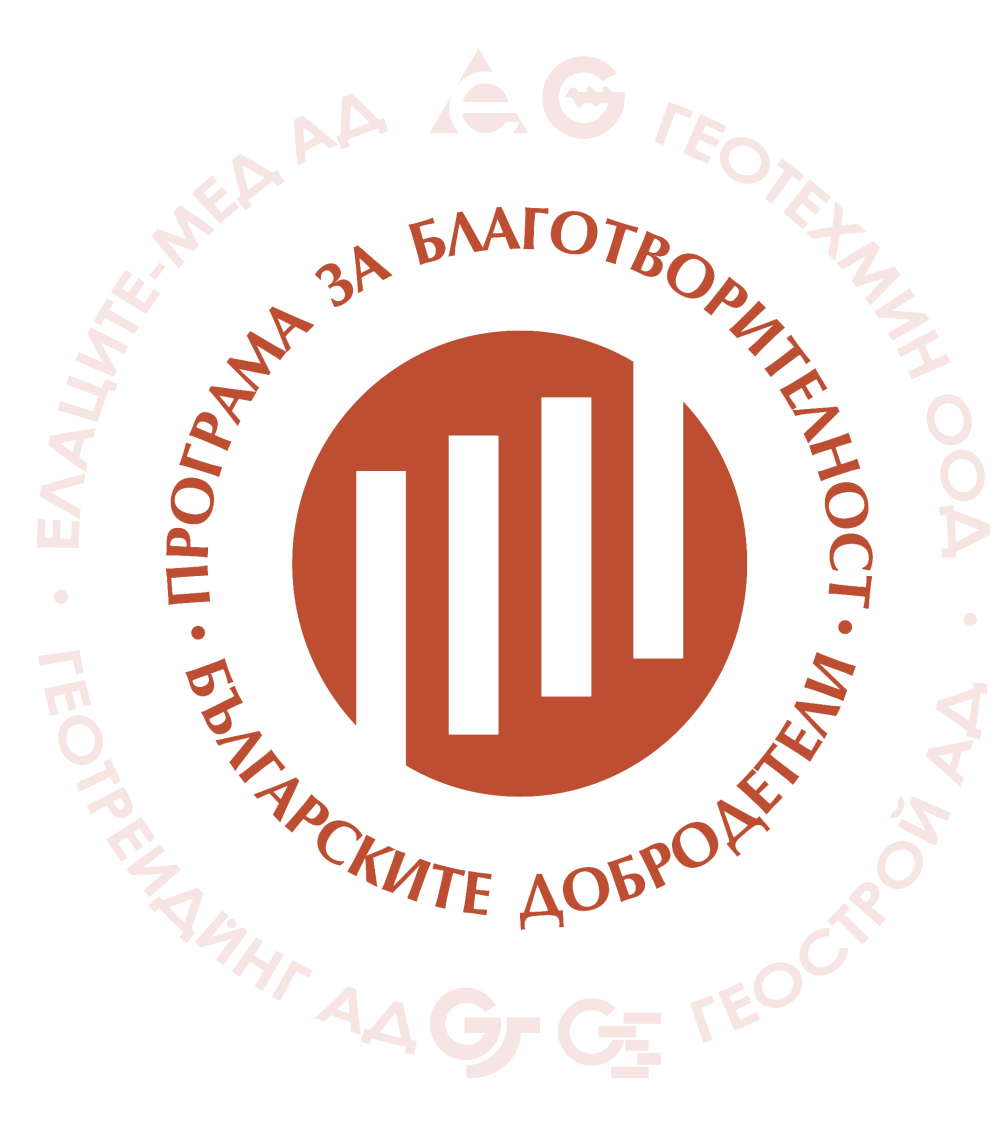 Ministry of Education and Science