Exhibition “The Health Centre in Antiquity and the Middle Ages” 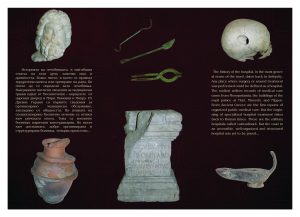 In early 2022, the National Anthropological Museum at the Institute of Experimental Morphology, Pathology and Anthropology with Museum of the Bulgarian Academy of Sciences (IEMPAM-BAS) presents the temporary exhibition “The Health Centre in Antiquity and the Middle Ages”, which is organized in partnership with the Museum of the History of Medicine at the Medical University-Plovdiv and the Historical Museum-Svishtov. The authors have focused on the origin and development of the hospital as a health institution, its structuring and financing, its growth as an educational centre, the achievements of hospital treatment. The current topic is developed and presented as a “civilizational” choice made by humanity.

The exhibition “The Health Centre in Antiquity and the Middle Ages” is realized with the financial support of the Ministry of Culture of the Republic of Bulgaria and is dedicated to the 15th anniversary of the opening of the National Anthropological Museum at IEMPAM-BAS, the only museum institution in the country presenting the results of scientific research in the field of paleoanthropology and anthropology of living populations.

The temporary exhibition can be viewed by visitors in the period 14 January – 30 June 2022 in the building of the National Anthropological Museum at IEMPAM-BAS in Sofia at 73, Tsarigradsko shose Blvd.