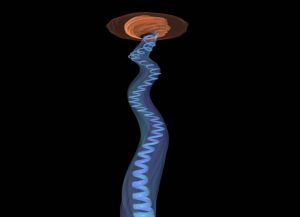 An international team involving Bulgarian astronomers has detected cycles of oscillating brightness in a jet of high-energy particles emitted by the blazar BL Lac. The results of this research were published in one of the most prestigious scientific journals in the world – “Nature”, no. 7926, Volume 609, 8 September 2022.

Observations from 37 different telescopes in 13 countries were used to realize this study. Our results were obtained with the 2-m RCC telescope and the 50/70 cm Schmidt telescope at the National Astronomical Observatory Rozhen, as well as with the 60-cm telescope at the Astronomical Observatory in Belogradchik. Co-authors of the article on the Bulgarian side from the Institute of Astronomy with NAO are the scientists Prof. Dr. Rumen Bachev, Prof. Dr. Evgeni Semkov, Assoc. Prof. Dr. Atanas Strigachev and Sen Asst. Prof. Dr. Alexander Kurtenkov. This is the second publication of this team of scientists from BAS in the prestigious journal “Nature” on the topic of blazars. The first presented a study of the blazar CTA 102 and was published in December 2017 in issue 7685, volume 552 of Nature. 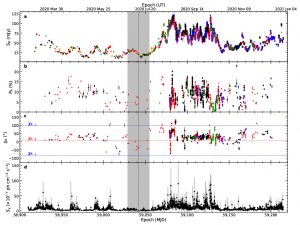 BL Lac’s blazar’s glow curves during the 2020 flare. Observations in the red part of the optical spectrum (about 635 nanometers) and in the gamma range (panels 1 and 4) are shown, as well as the observed value and polarization angle of the light (panels 2 and 3)

The observations of this type of objects are organised by Dr. Claudia Raiteri and Dr. Massimo Villata of the Astrophysical Observatory of Torino (Italy) and involve astronomers working around the world (Whole Earth Blazar Telescope). Data on blazar variability in the optical region are complemented by observations in gamma rays from the satellites of the Italian Space Agency, AGILE, and of NASA, Fermi. These observations led to the discovery of a cyclicity of visible brightness with a period of about 13 hours of the BL Lac blazar during the strong flare observed in all spectral regions in the second half of 2020.

Blazars are a type of active galactic nuclei whose energy source is matter that falls on a supermassive black hole at the centre of a galaxy. About 10% of active galactic nuclei emit a pair of jets that move through interstellar space at near-light speed. The blazar phenomenon occurs when one of these jets is pointed almost directly at Earth, making it appear much brighter. These jets radiate across the entire electro-magnetic spectrum, from the radio range, through the optical region, to the X-ray and gamma rays. The intensity of the emission changes rapidly with time, and the changes are usually random, with no periodicity.

The open dome of the 2-m telescope at Rozhen NAO. Author. V. Paskalev

BL Lac is located approximately 1 billion light-years from us and the mass of the black hole at its core is estimated to be around two hundred million solar masses. The team of astronomers revealed that a kink forms in the blazar jet, distorting the magnetic field in such a way that the observed brightness changes periodically. Also, the observed polarization of visible light from the blazar changes with a similar periodicity as the brightness. A correlation was also observed between the variability in visible light and in gamma rays, with no offset between them, meaning that they are emitted from the same region of the jet.