Bulgarian contribution to research on low carbon energy in transport 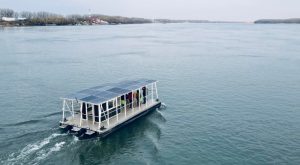 A hydrogen and solar-powered demonstration river vessel has been developed as part of Bulgaria’s first multidisciplinary projects involving industry, local government and business. The project was implemented under the National Science Programme “Low Carbon Energy for Transport and Domestic Use (EPLUS)” by a research team of Ruse University “Angel Kanchev”, with the participation of scientists from BAS and Technical University – Sofia.

HydRUforce is a demonstration vessel with hybrid propulsion based on solar energy – battery – hydrogen fuel cell and has zero carbon emissions. With the realization of the project, Bulgarian scientists are involved in the research on the use of low-carbon energy in Europe’s inland water transport.

A pontoon with a solar roof was used for the hull of the vessel. All its control and propulsion systems as well as their structural integration were designed and constructed under the EPLUS NSP. A significant innovation in the design of the vessel is the combination of energy for its propulsion from both solar panels and a hydrogen fuel cell.

The demonstration vessel can carry up to 12 passengers on board /including crew/ at 5-7 km/h upstream and 12-14 km/h downstream. The vessel is 10 and a half metres long and weighs three and a half tonnes. Its propulsion is provided by two electric motors, each motor being connected to a group of batteries. Two hydrogen fuel cells are additionally connected to extend the range of buoyancy, with hydrogen for the fuel cells provided by special 10-litre bottles. Solar panels have been installed on the roof of the vessel to allow the sun’s energy to be used to recharge the batteries.

The capabilities of the innovative HydRUforce vessel were tested during a demonstration cruise in the water area of the Danube river near Silistra. The vessel is due to be legalised in 2022, and in the meantime scientists will continue their work on test trials and an assessment of its practical suitability, energy and economic efficiency.

The project leader for the creation of the demonstration vessel is Prof. Velizara Pencheva from RU “Angel Kanchev”.

Within the framework of the National Science Programme “Low Carbon Energy for Transport and Domestic Use (EPLUS)”, Bulgarian researchers are working on projects on energy storage from renewable energy sources, efficient methods for carbon capture and utilisation and the potential of hydrogen use in transport. Scientists are developing the systems of a demonstration trolleybus with a “battery-fuel cell” hybrid range extender to run on Sofia’s public transport network, an innovation that is not known worldwide. Among the developments is a technological scheme to eliminate the main pollutants from waste water streams for the semi-industrial production of microalgae. Scientific achievements also include a positive electrode for a lithium-ion battery with a novel structure; zeolite adsorbents for carbon capture derived from waste coal ash; and photosynthetic biofuel cells using higher aquatic plants.

The National Science Programme on Low Carbon Energy for Transport and Domestic Use (EPLUS) is funded by the Ministry of Education and Science.