Scholarship for talented pupils by the Centre of Competence QUASAR 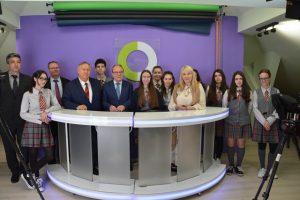 The Bulgarian Academy of Sciences and the National Centre for Quantum Communication, Intelligent Security Systems and Risk Management QUASAR have established a scholarship for talented pupils from 134th School “Dimcho Debelyanov”- ORT School. The annual scholarship is in the name of Dan Shechtman, Technion Professor of Metal Science and 2011 Nobel Laureate in Chemistry for his discovery of quasicrystals. This was announced at an event organised by the school in the presence of the President of BAS Prof. Julian Revalski, Full Member of the Academy, Acad. Chavdar Roumenin and Assoc. Prof. Lachezar Georgiev from the QUASAR Centre of Competence. 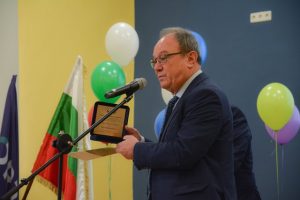 The scholarship was specially created by the team of the QUASAR Centre in two professional fields: “Natural Sciences” and “Technologies in Creative Industries”. The occasion for the announcement of the scholarship was the visit of Prof. Dan Shechtman in Bulgaria and his long-standing partnership with the school team and World ORT.

Researchers from the QUASAR Centre of Competence are actively supporting the school’s newly established STEM Centre, with a focus on the creative industries and life sciences, for whose needs the Centre’s experts have developed innovative integrated curricula.

The Principal of 134th “Dimcho Debelyanov” High School – ORT School Vesela Paldamova stressed the importance and significance of STEM vocational fields. “We are convinced that the early introduction of these professional fields increases interest in them. When we introduce students to STEM ideas, we create a foundation for future passion and interest in these subjects, which can lead to continued education and successful careers in these fields,” she said. “Of course, the most important thing in the educational process remains good teachers who can develop the potential of children and graduates. In order to ensure the high level of knowledge in STEM subject areas, we work in constant cooperation with academia,” Paldimova added. 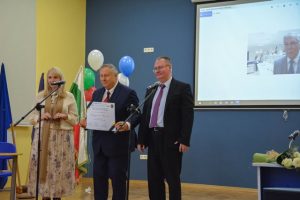 On behalf of the Bulgarian Academy of Sciences and as head of the National Centre for Quantum Communication, Intelligent Security Systems and Risk Management-QUASAR, Acad. Chavdar Roumenin presented an honorary plaque to Prof. Shechtman. “It is a great honor for me to announce the establishment of a special annual scholarship namely to the remarkable scientist Prof. Shechtman, as a symbol of the path to great discoveries and the ability to defend and assert even seemingly impossible ideas”, said Acad. Roumenin.  “On the other hand, with this scholarship, we would like to show once again the strong relationship between Bulgarian education and the State of Israel – a country leader in innovation and technology of the 21st century,” he added. Although Nobel Laureate Prof. Shechtman was unable to attend in person, a special plaque was presented to him in absentia and would be given to him.

Photographs and interviews were taken in the STEM Centre’s ‘workspace’, the Medium Studio. After the official ceremony, the QUASAR team and official guests from the Bulgarian Academy of Sciences visited the Memorial “Wall of the Bulgarian Righteous” in honor of the heroes who saved the Jews in Bulgaria.