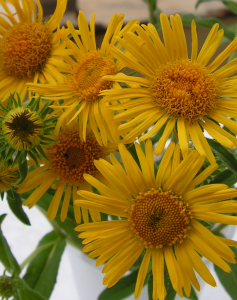 Scientists from BAS are developing in vitro systems to direct the accumulation of targeted secondary metabolites in Bulgarian medicinal plants. In vitro cultures of the medicinal plant British yellowhead (Inula britannica L.) were used in the research. The plant is popular in Chinese Traditional Medicine, where it is used in asthma and as a cough expectorant in pulmonary diseases. In Japanese Kampo traditional practice, a decoction of the flowers is used by nausea and as an expectorant. Pharmacological studies on extracts of various parts of the plant have shown their potential as a hepatoprotective, anticancer and anti-inflammatory agent. Scientific studies on the plant substantiate these activities by the presence of sesquiterpene lactones, diterpenes and flavonoids. The experiment conducted was with in vitro cultures obtained from the wild British yellowhead collected in Bulgaria.

The work of the scientists from the Institute of Organic Chemistry with Centre of Phytochemistry of BAS is the first published study in the field of phytochemical composition of in vitro grown British yellowhead.

By directing the growth and development of the plant, in vitro systems were derived to stimulate or inhibit the conversion of the sesquiterpene lactone gaillardin to britannin. These two chemical compounds have pronounced cytotoxicity against cancer cells by suppressing their proliferation and stimulating the process of programmed cell death (apoptosis) through different mechanisms. 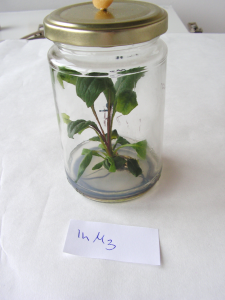 Researchers have achieved stimulation of the accumulation of dicaffeoylquinic acids and their selective isomerization from one form to another (directing biogenesis to 4,5- or to 3,4-dicaffeoylquinic acid). In the plant cell phenolic acids have a protective function in biotic and abiotic stress, and in the human organism they exhibit marked anti-inflammatory and anti-radical activity, have neuroprotective and cognitive-enhancing properties. Scientists traced the relationship of the obtained patterns with various parameters of the physiological state of the plant under different conditions.

The research exemplifies the potential of in vitro cell and tissue culture to direct the accumulation of secondary metabolites in plant tissues in a desired direction without the need for genetic manipulation.