Distinction of the President of BAS for Jörg Schenk 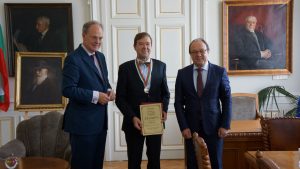 Jörg Schenk, Counsellor at the Embassy of the Federal Republic of Germany in Bulgaria and Head of the Science and Translations Departments, was awarded with the Badge Distinction of the President of BAS. The award was presented at the Academy in the presence of the Ambassador of the Federal Republic of Germany H.E. Christoph Eichhorn, the Board of BAS and representatives of the Humboldt Union in Bulgaria.

The distinction is awarded for services to the Bulgarian Academy of Sciences and for the strong support for the cooperation between Bulgarian and German scientists, announced the President of BAS Prof. Julian Revalski, Full Member of the Academy. “I had the opportunity to see many times how much you have done for Bulgaria and for the Academy’s institutes in particular,” said Prof. Revalski. 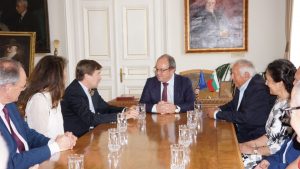 In presenting the award, Jörg Schenk’s many years of work for science in Bulgaria and his support for the Humboldt Union in Bulgaria were highlighted. In its 30 years of activity, the Humboldt Union, which brings together Bulgarian scholarship holders of the German Alexander von Humboldt Foundation, has always worked in close cooperation with the Embassy of the Federal Republic of Germany; an active partner in implementing its initiatives has been Mr. Jörg Schenk.