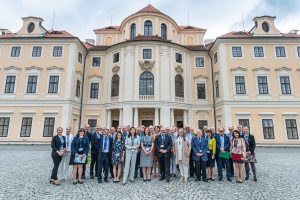 The President of BAS Prof. Julian Revalski, Full Member of the Academy, and the Scientific Secretaries of BAS Assoc. Prof. Ina Aneva and Prof. Denitsa Borisova participated in a meeting of the European Academies’ Scientific Advisory Council (EASAC) on 8-10 June 2022 near the city of Prague, Czech Republic.

The theme for the exchange of experiences among EASAC member academies was “How can we best use our experience for future science-based advice? How can we increase our impact at national and European level?”.

Prof. Revalski acquainted the participants with some of the current activities of BAS:

The Minister of Science, Research and Innovation of the Czech Republic, Ms Helena Langšádlová, also joined the meeting, presenting the plans for the Czech Presidency of the Council of the EU, which will take place in the second half of the year.

The meeting also discussed the organisation’s activities over the past six months, including EASAC’s energy, biosciences and environment programmes. New documents published by the organisation were presented – the “Regenerative Agriculture” report and the commentary “Bioenergy and Carbon Capture and Storage (BECCS) and its role in integrated assessment models”. An update on EASAC’s participation in the SAPEA project and the preparation of the SAPEA+ project was provided.

The European Academies’ Scientific Advisory Council (EASAC) is formed by the national academies of arts and sciences of the EU Member States, Norway, Switzerland and the United Kingdom. Through EASAC, the academies work together to provide independent, expert, evidence-based advice on the scientific aspects of European policies to those who make or influence policy within the European institutions.

Photo: Jana Plavec, the he Czech Academy of Sciences